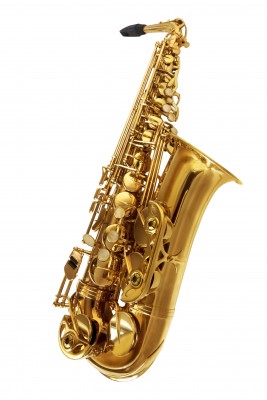 instrument that is a member of the woodwind family.  Saxophones are usually made of brass and played with a single-reed mouthpiece similar to that of the clarinet.  The saxophone was invented by the Belgian Adolphe Sax in 1846. He wanted to create an instrument that would both be the most powerful and vocal of the woodwinds and the most adaptive of the brass, which would fill the then vacant middle ground between the two sections.  He patented the sax on June 28, 1846 in two groups of seven instruments each.  Each series consisted of instruments of various sizes in alternating transposition.

The series pitched in B♭ and E♭, designed for military bands, has proved extremely popular and most saxophones encountered today are from this series.  A few saxophones remain from the less popular orchestral series pitched in C and F.  These instruments never gained a foothold in the orchestral world.  Although the C-melody was quite popular in the late 1920s and early 30s as a parlor instrument, it never gained a legitimate standing. Instruments keyed in F are rare.

While proving very popular in military band music, the saxophone is most commonly associated with popular music, big band music, blues, early rock and roll, ska and particularly jazz.  There is also a substantial repertoire of concert music in the classical idiom for the members of the saxophone family. Saxophone players are called saxophonists.

To find out more about my tuition services please give me a call on 01473 717290 or drop me an email at info@joannerolphmusic.co.uk.

Lessons are given at the following times: